Yep, it was a serious "craftaster". A major craft disaster.

I have been eying off a tutorial I saw a while ago  (read 18 months ago) in a magazine. It was a tutorial to make a doily lamp. "Wow!" thought I. "What a GREAT idea!" I bought some doilies at the local Salvos store, and packed them away for a rainy day.

Then recently, I saw the tutorial again on Pinterest. I pinned it to my "Can't Wait To Make" board, and dug out the old doilies. When my hubby told me he was thinking about what to do for a light shade for our bathroom light, I immediately thought of the doily lamp and told him not to worry as I had it covered. I even bought a big balloon, and some Mod Podge glue in order to be prepared.

A few weeks passed, and for some reason, I decided today was as good a day as any to give it a shot. Never mind that in re-reading the blog tutorial, I noticed that heaps of other people had tried it and it had not worked for them. "I've already bought the stuff," I thought. "Might as well have a try, maybe I'll be one of the lucky ones."

Maybe some of my husband's eternal optimism has rubbed off on me. Maybe I was too involved in my fond recollections of "helping" my Mum do paper mache pinata for Sunday School picnics year after year. Or maybe my brain has gone off with the fairies. Because I decided to do it as a craft activity with my two and a half year old daughter. Ha!

The set-up went very smoothly. I put lots of newspaper and old plastic shower curtains down (thank God I at least thought to do this!). I did the first few steps, blew up balloon, hung it up, and started painting doilies in Mod Podge. Eliza helped with this. Even that went well for the first two doilies. Things looked great, the doilies stuck nicely to the balloon, no glue got where it should not go. "Wow, this is so great!" I thought. 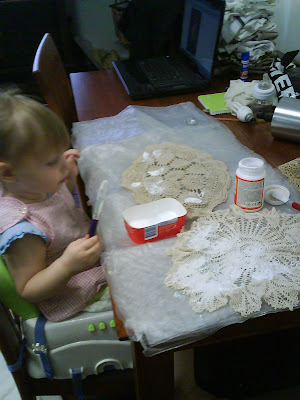 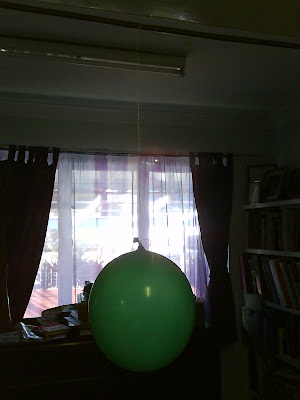 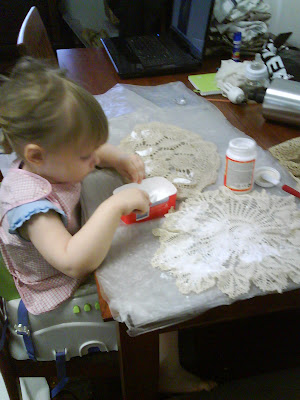 Sorry for the more-dodgy-than-usual photos, hubby had our camera at work, so I had to use my dodgy phone camera.

Hubby arrived home from an appointment just as Eliza decided to taste test the glue. Thankfully she did not swallow any, it came back out as soon as she put it in her mouth. I was thankful for the spare pair of hands to give her some water and clean out her mouth....

...Because by this point, I was trying to attach the third doily to the balloon, and it WOULD NOT STICK!!! Also, I ran out of glue, and had to crack open the hard coat Mod Podge earlier than I had planned. But no matter what I tried, I could not get the third, fourth or fifth doily to stick (yes, I did stupidly try to do more even though I could not get the third to stick!). Husband left for work, I was frustrated and very sticky, and Eliza tried to taste the glue AGAIN!! (Seems she gets that from me - I ate a LOT of paper mache glue while helping Mum. But that was just flour and water and I loved it!!)

I cut the balloon down and tried to make the doilies stick with even more glue. Still did not work. I finally gave up. I rolled up the glue-covered doilies in the shower curtains, with the empty Mod Podge containers and dumped them in a garbage bag. Then I popped the glue-covered balloon with a pin, while it was still on newspapers. NOTE TO SELF: put wet glue-covered balloon in garbage bag BEFORE popping with a pin. If you do not, you will have to crawl all over the floor spot mopping Mod Podge off the floor, walls, furniture...

Due to very sticky hands, I do not have pics of the craftaster. But use your imaginations! Thank God Mod Podge is able to be cleaned up with warm, soapy water!
Posted by Candy at 10:21