My Preparing For Baby Project

The countdown is on! One month today until our due date. Of course, in reality, that  means that baby could come in two weeks, or not for another 6 weeks...The former sounds exciting while the latter sounds torturous at present.

With baby #2, it seems that there is a lot less to prepare. Since our baby is going to be sharing a room with our two-year-old, we don't even have a nursery to prep. So my main 'prepare for baby' project was to restore a rocking chair.

I should have taken 'before' photos, but I forgot. We were given this rocking chair by my uncle and aunt, who had used it out on their deck in West End, close to the river. Being somewhat exposed to the weather meant that the varnish had come off and some mould grown on the arm rests, and various other bits of the timber. I sanded back the mould and used oil of cloves to try to kill it off before re-varnishing (which my darling hubby did for me). 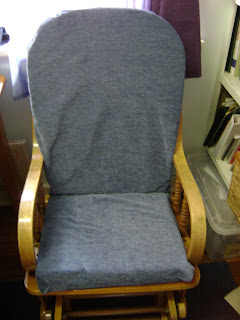 The foam of the cushions had turned to dust almost, so I cut new cushions from an old mattress we had been meaning to throw out. The foam was still good, so that was not an issue. Then I whipped up some rather rough cushion covers from some fabric I had lying around. It was one of those projects where there was only JUST enough fabric to make it, and this impacted on my design for sewing the covers. However, they do the job, and I love the fact that we spent absolutely no money on this project - we were able to use all materials that we already had lying around. 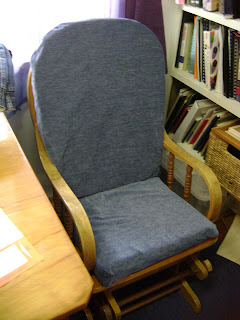 I now have one very comfy rocking chair that promises to be a treat to breastfeed in. So then baby...don't wait too long before coming, ok?
Posted by Candy at 15:23 No comments:

Email ThisBlogThis!Share to TwitterShare to FacebookShare to Pinterest
Labels: sewing

So we have a wedding in our family in a week and a half. The happy couple had difficulty finding a guest book that suited their needs. They eventually found one that ticked their boxes, except for one little detail...THE COVER. On a high from some journal covers I have thoroughly enjoyed making recently, I offered to make a cover for their guest book...

The bride immediately knew what she wanted - a book cover to match their wedding invitations. A lovely idea. So we shopped for fabric together, found some that matched to her liking, and talked through all the details.
Then came the part where I actually had to MAKE it. Hmmm. Not as simple as I had anticipated. However, I thankfully had the foresight to make sure that we bought enough fabric for me to do a trial run, and let's just say that my second attempt was much better than my first.

Thankfully I managed to complete it with plenty of time to spare. It's certainly not perfect, and I am trying hard to be happy with the end result and not just see all the imperfections. Now I just hope the bridal couple like it!
Posted by Candy at 15:09 No comments:

Yes, I am pregnant...34 weeks pregnant in fact. No, I don't know whether the baby is a boy or a girl. But perhaps it is the cluckiness, the memories of Eliza as a newborn, or the fact that several friends have had baby girls recently, but I am just so excited about making cute little girl things at the moment. 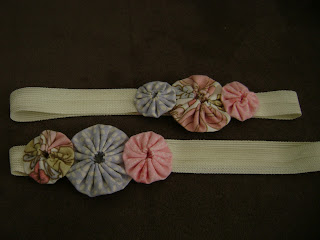 Just some simple little yo-yo headbands on shiny elastic. I put a little strip of felt on the back side where the elastic was joined, to cover the stitching so it won't be itchy for the little princess who wears it. 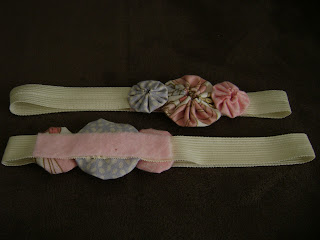 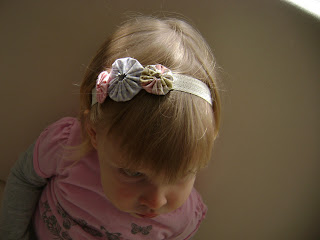 I couldn't resist trying one of my newly made NEWBORN headbands on my own little model. Now I shall pay the price, as the elastic stretched and I shall have to remake the headband with fresh elastic. Oh well, she looks cute in it. Maybe I should just keep this one for her as it is already stretched. Girls are so fun to make for!
Posted by Candy at 09:18 1 comment: