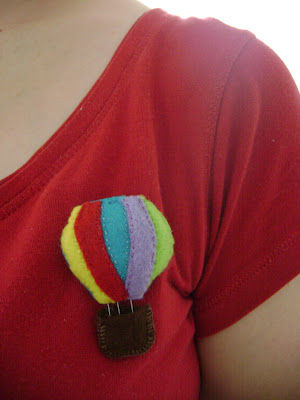 Here is the next brooch in my new brooch series. A teeny, tiny little hot air balloon. This one is inspired by some reminiscing on my part...

We are coming up to the seventh anniversary of hubby and my first ever date. Except that it was not actually a planned date as such. But is just too clumsy to say 'the seventh anniversary of the first time that we spent a day together because we were put on church supper team together and I decided to bake and told him I would be baking and he invited himself along to help out and we hit it off'. That's a bit of a mouthful. Anyway, 6th March will mark the seven years. That's kind of amazing to me.

In June, when we had been dating just a few months, my hubby (then boyfriend) set the bar for gift-giving rather high. He teased me for a while beforehand that he was just going to get me a box of thumbtacks, so I should not expect much. Well, when the day arrived, there was my beautifully-wrapped box of thumbtacks...along with a gift certificate for a hot air balloon ride for two, plus gourmet buffet breakfast at the Sofitel afterwards (and several other delightful treasures). While that is an extraordinary gift in itself, what really blew me away was this: he did not intend that he should be the one to accompany me in the hot air balloon.

Now before you start thinking that takes away from the romance of it all, hear me out. He had heard me mention once that I had really treasured my one-on-one time with my Dad as a kid, especially because I am one of five kids, so it was fairly rare. He stored that piece of information away, and decided that he would give me the gift of a super special once-in-a-lifetime experience, to share with my Dad. He also noted that my Dad is mad keen on flying and all things related, and thought he would love the experience too. How precious is that? Just another way I knew I had found a keeper. :)

Ever since then, whenever I see a hot air balloon, I fondly recall my lovely hot air balloon ride with my Dad, and thank God for my sweet, thoughtful husband who never ceases to surprise me with his ability to notice the details and follow through by actually doing something to show he cares (and not just for me, either).

P.S. - I thought he would never be able to top that birthday present - but he did! The next year, his birthday gift to me was an engagement ring and proposal :) Is he sweet or what?!
Posted by Candy at 14:15