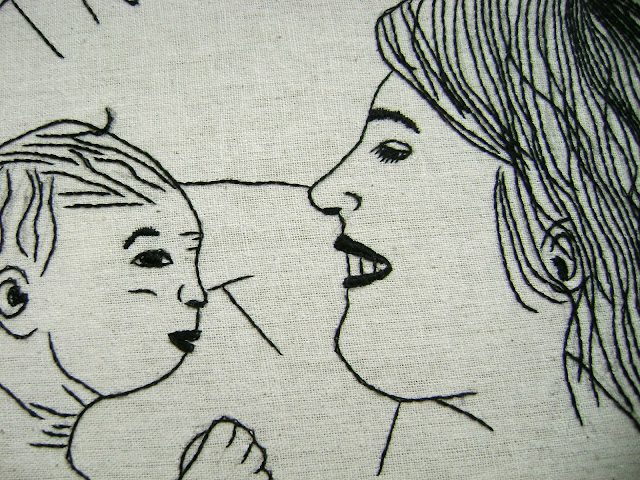 In a recent post of my ponderings, I mentioned that my son's first birthday was a stimulus for reflection on the past year. It was true...and longer lasting than I anticipated. I have not been able to escape the need to reflect and process events from twelve months ago.

I say "events" because I do not see my labour and birthing experience as a single event. There was a series of events that finally culminated in Theo's birth. A series of events that touched and changed me in a number of ways, events that still evoke strong emotions in me that make it difficult for me to talk or think about that time.

I honestly do not fully understand why this is so difficult for me to talk about. My guess is that an outsider would look at the two stories of the births of my two children and expect that I would have had a harder time coping or coming to terms with my first child's birth. I was hoping and praying for vaginal delivery with no pain relief, using active labour techniques, attended just by my midwife and hubby. I got an emergency C-section after a long, hard back-ache labour; baby needed oxygen; when I was first allowed to see her, they held her up over my head just as I started throwing up with the effects of the anesthetic; it was a while until I actually got to hold her...

As compared to my second birth...do you know, I can't yet bring myself to sum it up like I did for my daughter's? It's hard to explain, so I usually don't bother trying. But I really feel I need to. Here. Now....So here is my attempt. [PLEASE NOTE: I did try to cut this story down, but I just don't feel right about that, so I don't expect anyone to actually read the full account, it's long. I just had to get it out]. On 28th October last year, I was woken in the night by contractions, around midnight. I thought they were probably just warm-up contractions, and tried to go back to sleep. However, they started getting closer together and lasted longer, until they were 3 minutes apart, lasting almost a minute, and starting to get painful. I had woken hubby when I thought they were for real, we couldn't help but get excited and start to plan how we were going to get his parents to babysit our daughter. I mean, my emotions were fully engaged in "Our baby is coming today!" mode. To the point that when I had a text from a dear friend that she had given birth, I thought, "Hurray, we'll have babies on the same day!"

Then the contractions slowed down and stopped. *sigh* This went on for over a week, mostly during the night, sometimes lasting only a few hours, sometimes much longer. I was not getting a lot of sleep, I was exhausted, and most of all, I was confused. My emotions were all over the place. I was trying not to be excited about having that baby because he could still be weeks away, but I wanted to be prepared. At the end of a week of this, I was an emotional wreck. I had been in to the hospital a couple times for monitoring, and each time, the contractions would slow down and stop when I was hooked up to monitors.

Nine days after I first thought I would be having bub, my waters broke in the middle of the night. I noticed it and went back to sleep. I called the hospital the next morning, and they confirmed what  I suspected. Because I was attempting a VBAC (vaginal birth after caesarian), I would need to come in to the hospital for close monitoring, and would probably not be allowed to leave until after bub was born. So I spent the next few days in hospital, walking up and down stairs, trying to encourage baby to come without exhausting myself too much. I don't sleep well in hospitals though, and by this stage I was already physically and emotionally worn down.

My doctor supported my choice of attempting induction before a caesarian, for which I am grateful, and I was told the date they would induce me (due to risk of infection if left longer, I was induced within 72 hours of my waters breaking).

I was feeling quite positive and well and truly ready to have this baby by the time Tuesday rolled around. My hubby and I had practiced active labour techniques together, and we were READY to put them to use! And we did! As soon as I was started on the syntocinin drip, I began to have strong contractions, which very quickly started coming two minutes apart and lasting a minute, and increased in intensity almost straight away. My hubby and I were such a great team during those hours (roughly eight or nine hours), and I'm really proud of how well we managed without any pain relief. I needed him for every single contraction - poor man would take a bite or two of (my) lunch in between and I'd grab his arm for the next one. The contractions were relentless, but I was focused, determined, and equipped.

I was so focused, I didn't really start wondering why the baby wasn't coming out. I have a hazy recollection of various attendants consulting each other quietly, then doing yet another internal. Eventually, they told me to start pushing. I did this very carefully, under strict guidance. I pushed and I pushed. They told me I was pushing beautifully, and that my pushing was helping baby move down the birth canal, but that after each push, he would slip back up again. That was rather disheartening, but the midwife kept encouraging me that I could do it.

It turns out, I couldn't. At least, not before the consultants decided that they were going to have to use suction to help baby come out. So they informed me that they were giving me an episiotomy. "Do I have to?" I groaned. "Yes, for your baby, we have to." A deep disappointment washed over me, but determined to meet this baby, I braced myself for the procedure. 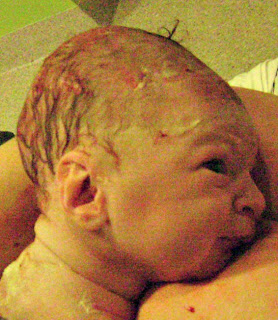 The next few moments are very confusing and hazy in my memory. I remember feeling so confused, with people all shouting at me. There must have been 8 or 10 people in the room by this point. I didn't know which voice to listen to. The pain of crowning, but the joy of touching baby's head...then the immense, unspeakable relief and joy when they handed my baby boy over onto my chest. He lay there and whimpered and my heart ached because I felt that I knew exactly how he felt. He voiced my extreme exhaustion, my disappointment with the difficult process, my satisfaction that it was over, and the pain that I was acutely aware of as a result of the process. My focus on just being with him and knowing what he was feeling, and enjoying the result of my labours helped to mask the awful task of being stitched up. Masked it, that is, until they took him off me to clean and wrap him. Eeek. I had him back before too long (though it felt like an age), and finally the birth suite emptied of attendants, and we were left in peace to recover. 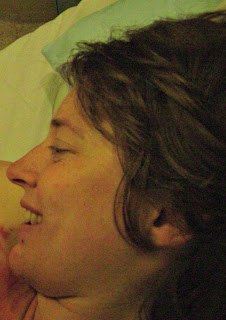 I took a long time to recover. I had anticipated (and been educated) that a VBAC would be easier to recover from than a caesarian. This was not my experience at all. I had a lot of pain in my bruising and my stitches (I tore in several places, as well as the episiotomy scar), for eight weeks after the birth. It took that long before I could stand for more than five minutes at a time. I was simply not prepared for it to take so long to feel better. Once I started feeling a little better physically, the flashbacks started.

Now, my son's birth was by no means a horrific birth. There are many stories that are much more terrifying and agonising. But for some reason, I had flashbacks to various moments of the birth for many months afterwards. As in, re-experiencing those moments, the pain, the intense emotions. Can you believe I am ashamed to admit it? Because, somehow, I believe that I am not a strong woman if I have a difficult time with birthing a child. Where did that come from? I am happy to say that the pain flashbacks seem to have passed now. However, I still have surges of strong emotions from time to time (for example, when hearing about someone else having a baby, or while writing this post). As a psychologist, I have a strong desire to understand my emotions, but I also know that sometimes it is important just to sit with them, and let them BE, no matter how confusing, intense or even unpleasant. And now, after years of encouraging people to do just that, I know personally just how hard that can be.

Through all of the reflecting lately, I came to the conclusion that I needed to do something that could help me to anchor my memory of the birth to the precious and joyous moments, rather than the disappointing and difficult moments. I have Kristen from HeyPaul Studios to thank for her #hastystitch challenge as well as her recent post about the potentially therapuetic nature of embroidery - these were other timely factors that prompted me to come up with a creative way of expressing my joy at meeting Theo, which could also be a way to process the strong, conflicting emotions at the same time.  So I decided to sketch the moments I wanted to anchor to, and stitch the sketch onto fabric.

I have to say, the process of stitching this was unlike any other stitching I have done. I felt driven to complete it, and did so within a few days. I had strong emotions very close to the surface for those few days, even when I wasn't stitching. And now that it is done, I have a strong sense of satisfaction, though it is not perfect, I can live with it and be proud of it. Much like my birth story, come to think of it... 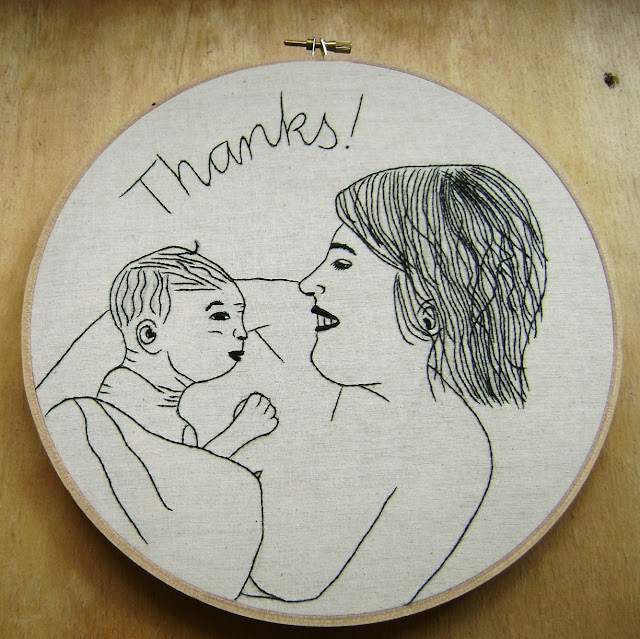