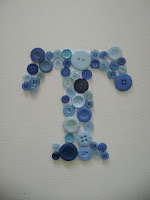 I've taken a hiatus from the Quiet Book at present, to do a quick project for my little man. We had been planning on having our two kidlets share a bedroom, so I had not spent any time preparing a nursery, as it was already set up. 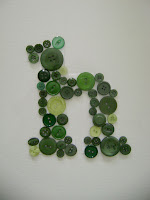 However...things do not always go to plan. My poor darling daughter happens to take after me, and apparently just cannot sleep with Mr T in her room, even when he is happily (albeit noisily) asleep. We discovered this after a night of madam lying awake crying out 'Mumma, Mumma, Mumma, baby squeaking a little bit!' OVER AND OVER AND OVER AGAIN, until I finally gave in and moved him into the bassinet in the loungeroom!

So...we have moved the little man into a tiny room of his own, which just happened to already have pale blue walls and blue curtains - appropriate for a little boy, right? But of course, I just had to do some decorating! There is not a lot of wall space in there, but I wanted to brighten things up a bit. When our daughter was born, my hubby did a lovely painting for her with her name spelled out in stars in the night sky. I wanted to do a name piece for our boy. 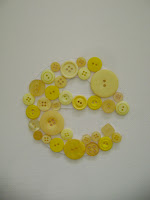 I've always loved buttons, and have quite a collection. I have been eying off some button art on Pinterest for a while, so it was the logical choice for a name plaque for Mr T.  I printed out some letters in a font I liked, covered a canvas in white fabric, and set up the buttons as I liked, before carefully gluing them in place.

It was a little fiddly, and I was totally paranoid that Miss E would bump the canvas when the buttons were placed correctly, but before they were glued...but thankfully we managed to avert any such disaster (though there were a few close calls!). Finished product hanging on the wall within 24 hours :) 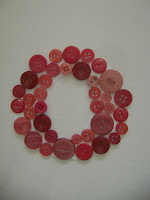 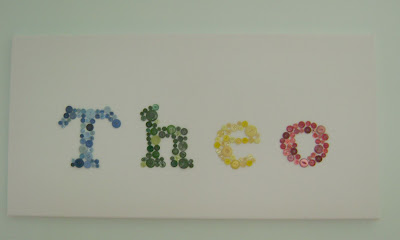